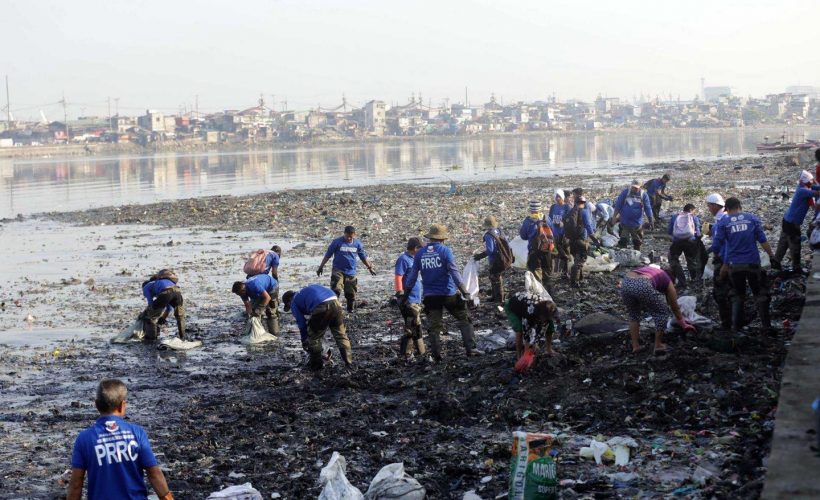 In February this year, hundreds of volunteers participated in a coastal cleanup of Manila Bay, where 45.59 tonnes of garbage were collected.

The waste sector in the Philippines has contributed 7 per cent to the country’s total carbon emissions in 2012, making the shift to a minimal-waste consumption model a key part of the country’s emissions reduction goal.

The Philippines goes through more than 200 million pieces of single-use plastic each day, lending a real urgency to government efforts to adopt a consumption model that prioritises reducing and recycling rather than disposing of that waste.

But while other countries have embarked on a similar transition by taxing the use of plastic, the Philippines can make the shift faster if the government provides incentives to companies, according to experts from the United Nations Development Programme (UNDP) and the Japan International Cooperation Agency (JICA).

“The Philippines should incentivise companies rather than tax people … rather than punishing them for consuming,” Bradley Busetto, director of the UNDP’s Global Centre for Technology, Innovation and Sustainable Development, said during the recent Innovate4Climate forum held by the World Bank in Singapore.

Product packaging, especially single-use plastic, contributes to the bourgenoning waste problem in the country that affects its coastal resources and marine life. Retail products sold in smaller quantities packaged in sachets are more affordable, and their continued purchase drives profits for multinational companies in the Philippines.

Globally, carbon emissions from plastics reached 1.8 billion metric tonnes in 2015, according to a 2019 study by researchers at the University of California, Santa Barbara. Emissions come from the whole life cycle of plastics: from production and transportation, to disposal and incineration.

The Philippines should incentivise companies rather than tax people … rather than punishing them for consuming.

The Philippines, like the rest of the world, is in a race to reduce carbon emissions to limit the global temperature rise to 1.5 degrees Celsius (2.7 degrees Fahrenheit), and one way of doing so is to drastically reduce waste, particularly plastic. The country’s waste sector contributed 7 per cent of its total carbon emissions in 2012, according to the World Resources Institute’s (WRI) Climate Analysis Indicators Tool.

The introduction of incentives as a policy intervention to mitigate emissions from the waste sector is an idea supported by Koji Fukuda, JICA’s chief technical adviser.

“For the time being, the government should definitely raise awareness but at the same time there are many companies that are already aware of this movement so [they] do the non-fiscal incentive, like a reward, to recognise their efforts,” Fukuda says.

Such incentives have been floated in Thailand, where potential privileges for investments that focus on environmental protection — a key activity of which is the move to the circular, or waste-minimising, economy — are being studied.

“We cannot continue consuming, producing, behaving in the way we do so far,” said Daniel Calleja Crespo, the European Commission’s director-general for the environment.“We must move from linear economy to circular economy.”

The waste problem is being taken seriously in the Philippines, but poor implementation of the National Solid Waste Management Act of 1999 remains a challenge. President Rodrigo Duterte has threatened “war” against Canada over shipped waste that has been rotting in Philippine ports for years. Hundreds of volunteers organise regular cleanups in Manila Bay and other coastal areas in the country.

Last year, the Department of Environment and Natural Resources (DENR) cracked down on local government officials who failed to close open-air dumpsites nationwide. Duterte backed numerous waste-to-energy projects last year to address the waste problem and at the same time supplement energy sources. Incineration, however, has been banned in the country since the passage of the Clean Air Act in 1999.

Legislation to minimise plastic use was also proposed in the Senate in 2018. Loren Legarda, a senator at the time, filed a bill  that would have charged consumers for using single-use plastics and sought to ban the import and use of such packaging in traditional markets and restaurants.

The bill also proposes penalties ranging from $100 to $10,000 for companies or small and medium businesses, as well as incentives in the form of special tax deductions for companies that pursue research and development in addressing the problem.

However, the bill remains pending in both houses of Congress, and it’s unclear if it will be refiled with the opening of Congress this July. In the absence of a national law, it’s been left up to local officials to impose levies or ban the use of single-use plastics.

The concept of incentivising companies to address the plastic waste problem at their end instead of passing on the responsibility to consumers is already being tried elsewhere. China’s Circular Economy Promotion Law, for one, extends tax preferences to industrial activities that try to maximize the reuse and recycling of plastic waste. The European Union’s Circular Economy Package, which targets small and medium enterprises has an allotment of 2.3 billion euros ($2.6 billion) for investments in waste-conversion technology and applications.

From linear to circular

In a linear economy, materials are thrown away after being used. Plastics, especially those used in packaging, are often disposed of after a single use. In a circular economy, these materials would be redesigned or reused for the manufacture of other products.

In other countries in Southeast Asia, such as Thailandand and Singapore, the private sector has rolled out initiatives aimed at helping the shift to a circular economy.

In Singapore, the government’s investment company, Temasek, has partnered with Taiwanese engineering firm Miniwiz and the DesignSingapore Council, among others, to organise “Trash to Fash,” a competition in which fashion students created clothes using recycled polyester fabric, or rPET. The material can be made from PET plastic water bottles, which are ground up, melted and turned into fabric.

“Establishing the circular economy needs to begin from the ground up, and we have to get our hands dirty,” said Arthur Huang, Miniwiz’s chief executive officer and founder. “As the participants collect and exchange PET bottles, they will see firsthand the large amount of waste created by single-use plastics and learn about what needs to be done to close the loop.”

In Thailand, industrial-estate operator Amata Corporation and Siam Cement’s chemicals business have built roads using a mixture of plastic and asphalt in Amata’s “smart city” of Chonburi, described as such because the industrial site aims to minimise its environmental impacts.

“The calculated cost is 5 to 6 per cent lower than the regular cost. The capacity of the plastic road to be heat- and water-resistant is also higher,” said Lena Ng, Amata Corporation’s chief investment officer, adding that the investment “can contribute to sustainability” and increase savings.

A similar initiative was started in the Philippines and initially tested on smaller municipal roads. Two “smart cities” are also being built in the Philippines: in the city’s capital Manila through a massive reclamation project in Manila Bay that’s generated much criticism; and in Clark, Pampanga, a site that’s expected to be completed by 2022.